Last week was a cold week in Brazil with isolated light patchy frost as far north as southern Mato Grosso. It was not a season-ending killing frost, so the safrinha corn escaped significant damage from the frosts. There was only light damage reported mainly in low lying areas. The weather in central Brazil last week was cold and continued dry, to the detriment of the safrinha corn. In many areas of central Brazil, the last significant rain was more than 60 days ago.

The safrinha corn in Brazil was 1.35% harvested as of late last week compared to 0.45% last year and 0.85% average according to Patria AgroNegocios. Early yields are highly variable with some satisfactory yields and some very low yields.

Mato Grosso - Farmers in the state had harvested 2.37% of their safrinha corn as of late last week compared to 0.09% last year and 0.07% average according to the Mato Grosso Institute of Agricultural Economics. The corn harvest pace in Mato Grosso will accelerate as we move into June. Western and southern Mato Grosso have been the driest areas of the state and the dryness has impacted the safrinha corn yields (see next article).

Below is the evolution of the corn harvest in Mato Grosso with the yellow shaded area being the maximum and minimum, the dotted line is the 5-year average, the green line is 2020/21, and the red line is 2021/22. 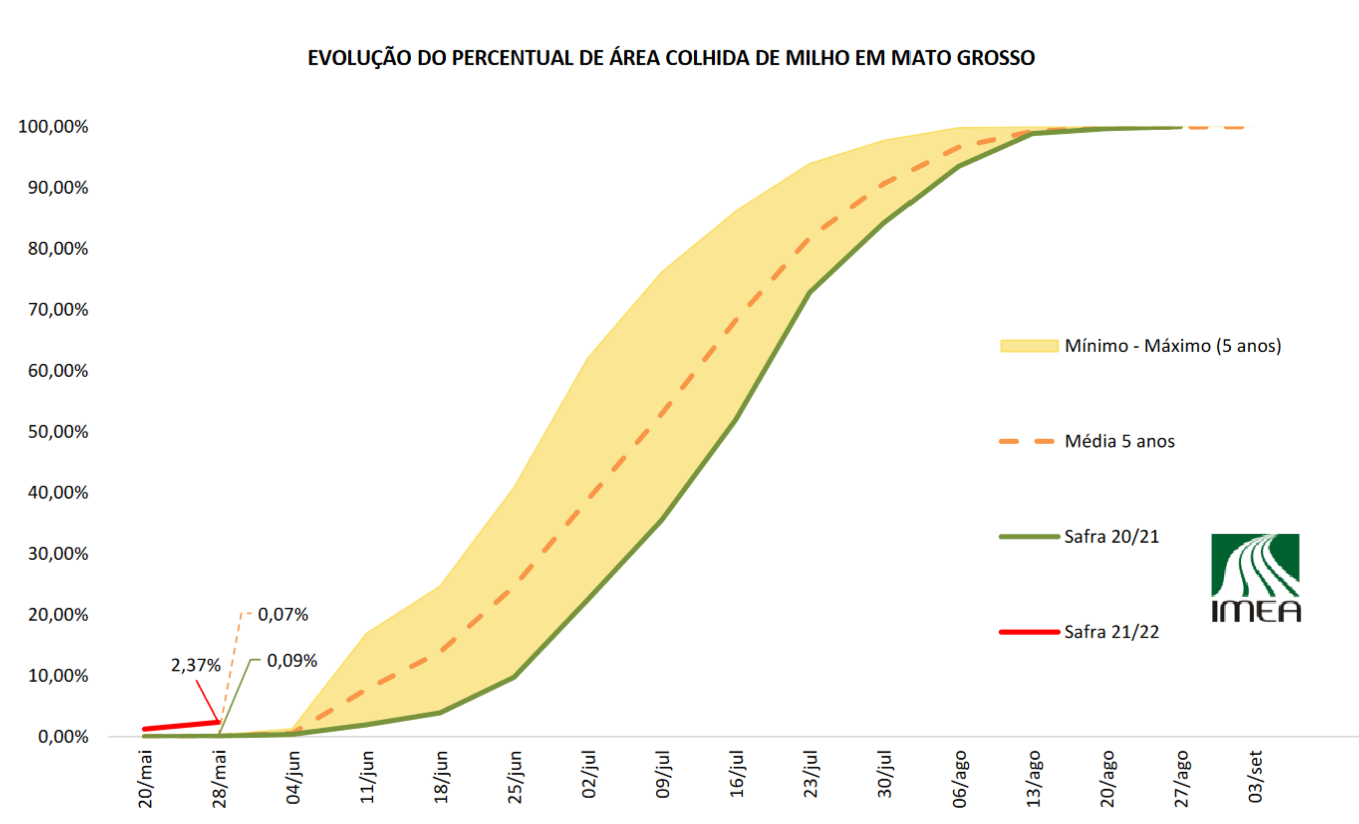 Parana - The Department of Rural Economics (Deral) reported that the safrinha corn in Parana was 4% in vegetative development, 22% pollinating, 60% filling grain, and 14% mature as of earlier last week. The corn was rated 2% poor, 14% average, and 84% good. Deral estimates that the state will produce 16 million tons of safrinha corn in 2022.

Northern Parana received some rain over the weekend and there is more in the forecast. Rainfall amounts varied from about half an inch to an inch and they should help some of the later planted corn since only 14% of the corn was rated mature as of earlier last week.

In the municipality of Marechal Candido Rondon in western Parana, the safrinha corn was planted within the ideal window and the weather was beneficial during the growing season, but heavy pest pressure is expected to reduce yields. According to the President of the Rural Union of Marechal Candido Rondon, the pressure from corn leafhoppers was very high this year and the virus transmitted by the pest is impacting corn yields. The corn yields in the municipality are expected to be down 25% due to the pest.

Farmers are not aggressively forward selling their safrinha corn due to uncertainty concerning yields and they will sell most of their corn post-harvest. Farmers are finalizing their seed and input purchases for the 2022/23 soybean crop and the cost of production is expected to be up 30% compared to the 2021/22 season.

Mato Grosso do Sul - In the municipality of Sao Gabriel do Oeste in central Mato Grosso do Sul, the safrinha corn crop was developing fine until the month of April. Since then, it has suffered from increased pest pressures especially from corn leafhoppers and then two weeks ago, cold temperatures resulted in isolated frosts in low lying areas.

Some farmers in the municipality have reported that they applied 13 insecticide applications trying to control corn leafhoppers only to have their corn yields decline by 20% compared to the 120 sacks per hectare (114 bu/ac) they expected at the start of the season.